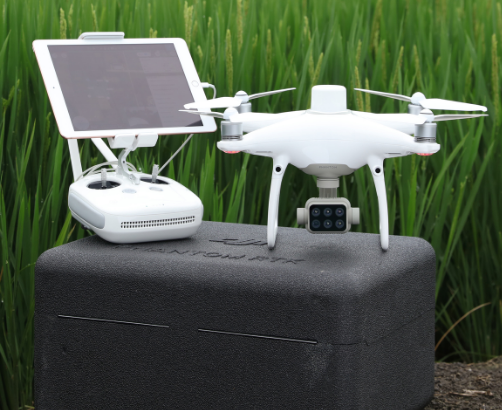 A Guide On Drone Survey Data

A Guide To Drone Survey Data

The most important question in producing any type of drone survey data is, what are you trying to accomplish?

Once this question is answered, only then can you decide what platform and more importantly what sensor you will require. Simply put, a drone is just ‘a sensor in the sky’. This can immediately put into context the importance of selecting the right sensor for the desired data and job that is being attempted.

The graph below gives a good indication of how certain sensors offer different data outputs. Note how the DJI Zenmuse L1 actually offers both LiDAR and RGB data. All sensors are available from Survey Drone Ireland upon request. 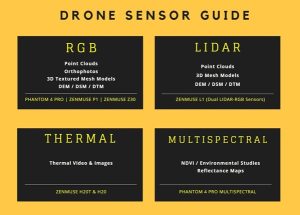 One of the most popular and capable photogrammetry software packages on the market today is Pix4D. It is the perfect tool for processing photogrammetry missions with options to process both RGB based surveys and multispectral surveys. Newer releases of Pix4D allow users to combine both photogrammetry and LiDAR seamlessly for spectacular results.

DJI Terra enables users to process LiDAR data from the Zenmuse L1 sensor, multispectral data from the Phantom 4 PRO Multispectral drone as well as photogrammetric missions from a sweep of DJI’s RGB sensors in one package. The software can enable operators to view and edit information all in the one ecosystem.

Both packages enable users to input a variety of raw data from the field and generate some fantastic results including, point clouds, DEM’s, orthophotos, 3D models and much more. Here we will discuss each in more detail.

Point clouds are the bread and butter of most drone surveys. They can be generated using either photogrammetry or LiDAR sensors and provide the most amount of survey outputs from which surveyors can extract a wealth of information. As well as this, point clouds act as the main foundation upon which DEM’s, orthophotos and mesh models are created.

Most often sought after by quarries, volume calculations are provided by a given software mathematically comparing the quantity of material in a user-defined area within a 3D point cloud. Using a point cloud in DJI Terra the volume of a given area or stockpile is calculated by the user defining a ground plane and clicking around the area in question. This result can be recorded and given to the client directly or even better still, indicated on the orthophoto generated. This process mitigates the need for surveyors on the ground climbing up and down steep, loose material. 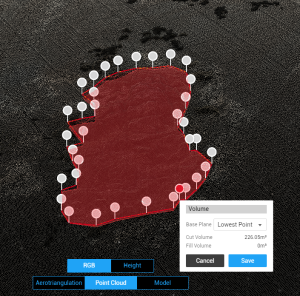 Point clouds themselves can be described as 3D models however, when we think of models we often refer to the mesh model generated off the back of a point cloud. Simply put, a mesh is generated by generating triangular polygons between each point in the point cloud.

The quality of a mesh model relates to how clean the reconstruction is and how many triangles are in the mesh. A mesh with a high number of triangles can require vast quantities of disk space on a computer due to the triangle polygons. A mesh model is said to be ‘textured’ when RGB images are used to colourise the model.

3D linework, contours, spotheights, ridge and eave levels are among a wealth of topographical information that can be extracted from drone data. Whether from photogrammetry or LiDAR, point clouds are the main dataset from which topographical data can be extracted. It must be noted that, depending on the sensor used, drone acquired point clouds can be at the mercy of dark shadows, occluded areas and poor colourisation. They are by no means perfect however no survey method is, moving forward with limitations in mind is important.

Ortho meaning ‘orthogonal’ or perpendicular to the subject, orthophotos offer high resolution images often spanning from hundreds of meters to kilometers in length. Orthophotos can be captured using any remote sensing platform from satellites and large aircraft to the smallest of foldable drones.

Orthophotos are a major benefit of flying a drone over any given site. To be able to rapidly capture the entire site as one whole high resolution image. Depending on the computer processing capability of the operator and client, orthophotos can be divided into smaller segments for easier viewing. The file sizes can vary drastically from a compressed .JPEG file to an uncompressed .TIFF file.

Although the most common uses of orthophotos are looking down on the ground from above they can also be used to produce very high resolution, seamless images of building facades.

What is what and which is which? These terms are often confused and used interchangeably by surveyors and clients. The naming differences are elevation, terrain and surface respectively.

According to the United States Geological Survey (USGS):

“A Digital Elevation Model (DEM) is a representation of the bare ground (bare earth) topographic surface of the Earth excluding trees, buildings, and any other surface objects”.

According to the European Environment Agency (EEA):

By definition both a DEM and DTM are quite similar. One small distinction is that DTM’s may include more natural features such as rivers and ridges than a DEM. A DTM can be interpolated to generate a DEM but not the other way around.

DSM is a Digital Surface Model

A DSM differentiates itself much more than both DEM’s and DTM’s by including all natural and man-made features in a given survey area. It is often the case that all three names will be used interchangeably. However, as you can see there are subtle yet important distinctions to be made. 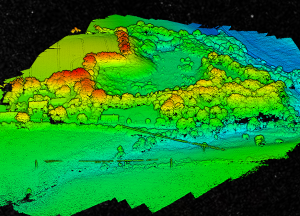 Thermal images are produced by converting Infrared Radiation (heat) into visible images. This in turn can be displayed to the user essentially as a heat map showing areas in varying shades from blue to red to white with white being the hottest spots.

Thermal images are captured entirely passively compared to lidar which is actively sending light returns from the sensor. In that regard it is closer to regular RGB sensors although since heat signatures are picked up thermal imaging can be used at night, unlike RGB sensors. 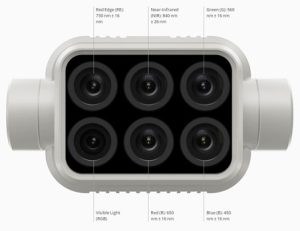 Near-Infrared Sensor Index (NDVI) mapping is a fantastic application of multispectral sensors. This type of mapping is used to indicate the health of vegetation and crops. From farmers to continent-wide environmental studies, NDVI is a very important mapping solution.

NDVI measures the difference between near-infrared and red wavelengths of light. These wavelengths are important as healthy vegetation strongly reflects near-infrared and absorbs red light. Maps are displayed from a value of -1 (likely water) to +1 (dense green vegetation). Two of the largest applications of this data are agricultural management and environmental monitoring and inspection. 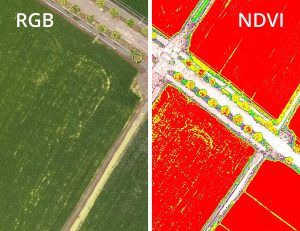 From regular RGB sensing to LiDAR, thermal and multispectral. Drones today, and even more so in the coming years, offer fantastic solutions in a wide variety of applications.

Survey Drones Ireland are leaders in this field and will continue to be in the coming years. The industry has some exciting times ahead! To join along, get in touch at info@surveydrones.ie for any inquiries, support and sales.

For more information learn more about Drone Survey contact one of our experts at Survey Drones Ireland who will be more than willing to assist you in finding what suits your needs.

If you need further advice on this please send an email to info@surveydrones.ie or fill in the contact page on this website.